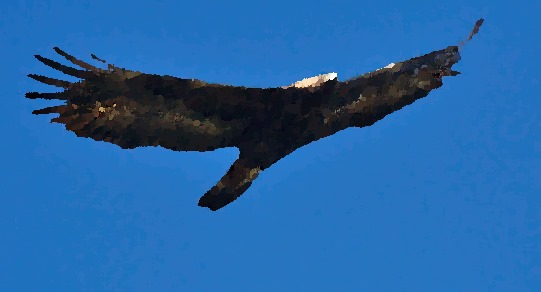 Who knows if he will tell his grandchildren of his deeds one day. And, above all, who knows how they will react on hearing their grandfather tell the story of how, when trying out his rifle, he “shot down” a Golden Eagle. A golden eagle? And when will his grandchildren ever get the chance to see a golden eagle fly and swoop in the skies? It was the beginning of September when one of the rarest examples of golden eagle was killed on Mount Coscerno, in the Nera valley.

The problem for our “hero” was that when eagles mate, and nest, they remain faithful for the rest of their lives. How could the male of such a noble species not react? And in fact he did! The newspapers said “The male eagle returned to the spot, and, crawling along the ground, grabbed two huge stones in its claws. It flew up high into the sky, to about 400 metres and dropped the stones from close to its nest, and only by pure luck did the stones miss the hunter and the other two people who were with him a short distance away”.